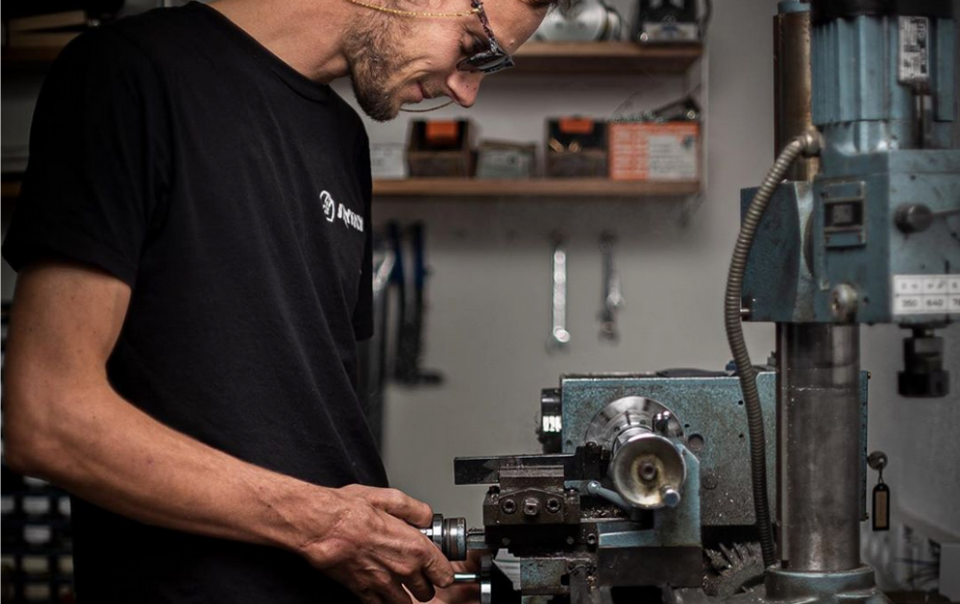 Daniel: “Just start and stick with it.”

Art can take so many different forms. Who would have thought that it is possible to design a longboard with an invisible electric motor that can be controled by a finger ring? Get to know an engineer from the Bodensee region in Germany who inspired me at first sight when we met at Intersolar Europe in Munich, the worldwide leading exhibition for the solar economy.

LJ: Daniel, you invented a longboard with an invisible electric motor. How on earth did you come up with that?

Daniel: The idea came about more or less by chance. A good friend of mine who has been building longboard decks for years was looking for an electric drive. At that time, the market for e-sports equipment was significantly smaller and less developed. In most models, the battery was attached below the board. That changed the riding experience and the aesthetics of the board enormously. In addition, most products were only offered in complete sets. So he asked me if it would be possible to develop a completely new, invisible motor that can be used flexibly with any deck. At the time I was employed as an electrical engineer and at first I didn’t even think about founding a company. But the question was now in the room and I never let go. In a round with friends two weeks later, the idea for the implementation via a hollow axle was born. In the following months, my current business partner Benedict Kuhlmann and I used every free minute to find out how the idea could be put into practice. We’re both electrical engineers and we’re interested in sports. We were able to test everything that we theoretically thought up right outside the front door. That was a lot of fun.

LJ: And how did the idea become a business?

Daniel: Since we had neither large financial resources nor a professional workshop, the development of the first functional prototype took a little more than a year. An important success factor on this path was the research work of Prof. Kasper from the University of Magdeburg. Together with a doctoral student, he provided the basic idea for our current wheel hub motor, which we then brought to series production readiness, among other things by inventing our own winding machine. After that, things quickly moved towards the start-up: We patented our “overall drive integrated into the axis”, brought my sister Isabell on board as COO and started building up the business step by step.

LJ: There are now some suppliers on the market. What makes your e-longboards so unique?

Daniel: What defines us is still our lean approach. Our e-drives can be screwed to any deck and are completely invisible to the user. The final weight of a board with a JayKay axle is one of the lightest e-longboards in the world at 5.5 kilograms. In addition, there is energy recovery when braking. It ensures that electronic braking works even when the battery is empty and, with a charging time of just 2.5 hours, enables ranges of 12 to 15 kilometers. Another function that is particularly appreciated by our customers is the one hundred percent free wheeling of the wheels. It ensures that the conventional driving experience is not impaired by the electric operation.

LJ: How did the finger ring control come about?

Daniel: Before we decided on the control with the ring, we had a completely different solution in mind. The axis was originally intended to be controlled by hand gestures. After we had built the first prototypes and obtained our first testimonials, however, opinions diverged very widely. Half of them were absolutely thrilled. The other half didn’t really get on with it. Since control via the smartphone was out of the question for us for security reasons, the finger ring was the best alternative.

LJ: The e-longboards are currently not yet approved, at least not for German road traffic. What does this mean for JayKay’s future?

Daniel: Yes, unfortunately that is the case. So far, the adoption of the Electric Vehicle Ordinance in June 2019 has resulted in the approval of e-scooters, but despite the announcement, a corresponding ordinance for “small electric vehicles without handlebars” is still a long time coming. In order to accelerate the process, we have now organized ourselves together with other manufacturers through the Electric Empire Bundesverband Elektrokleinstfahrzeuge e.V. At the same time we started to analyze other markets. In all of Europe (except Germany) e-longboards are already allowed to take part in road traffic. From my point of view, another important factor in this context is infrastructure. In large and medium-sized cities in particular, most of the public paths and roads are still used by cars. With regard to climate change, new concepts are urgently needed here. For example, what if we reduced the number of cars in cities and converted the current parking lanes into additional lanes, especially for small electric vehicles? 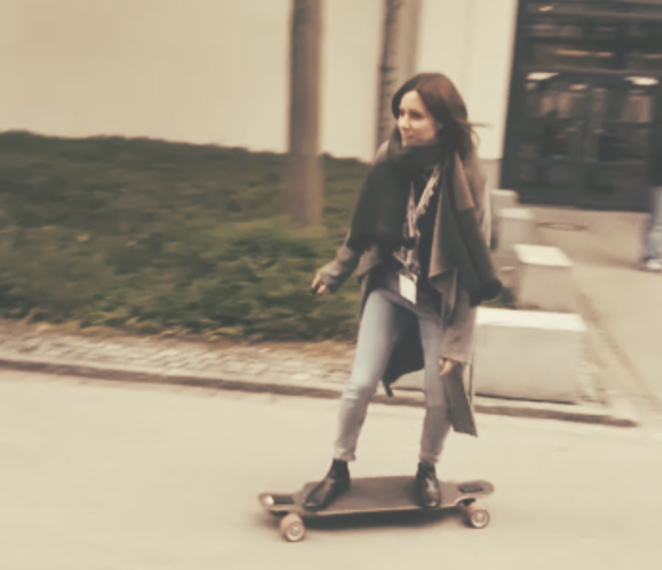 My first try at Intersolar Europe in Munich, May, 2019

LJ: And where should the journey go in the long term?

Daniel: We are already working on an app that will offer additional functions for users. Plans include digital assistants for route and range planning, a self-service portal for simple maintenance work, such as changing wheels and decks, and an alarm function when the battery is low. We also want to use this method to evaluate the technical user data of the boards and use them for the development of new models. The second generation of our axle will also bring a number of other improvements and functions. But we’ll only reveal that when the time comes. The first thing to do now is to successfully market the current product.

I want to breathe new life into today’s sports equipment.

LJ: What has been the biggest challenge for you so far?

Daniel: I can answer that very clearly. As an outsider, you might think that developing the technology was the hardest part. But that is absolutely not the case. The technology part is the easy. I do it with pleasure. It was much more difficult for me to find the point where the development process is complete. Unfortunately, a physical product is not the same as an app, where you can simply put out an update a month later. Whenever I looked at the board, I thought it wasn’t ready for the market. I just couldn’t imagine that our prototype, developed in the garage, could actually keep up with industrial products. It could do it anyway. We even totally over-engineered it. The invisible drive alone would have been more than enough as a unique selling point to begin with. The first boards sold could already do a lot more. 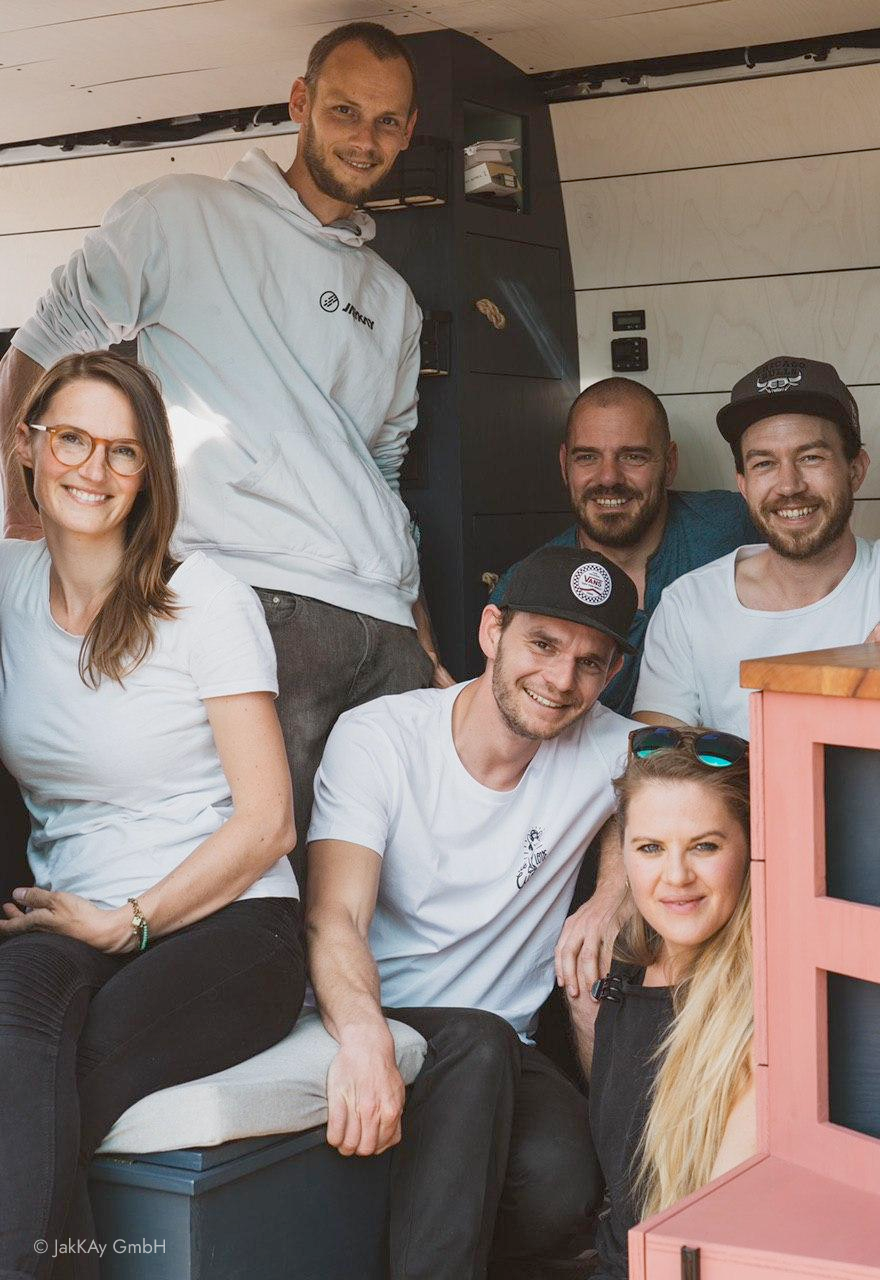 LJ: Were there any other topics that would keep you awake?

Daniel: Yes, the subject of marketing. That is always a challenge. It is important to me that we free ourselves from the typical paths here. That is also the reason why we always brainstorm marketing measures. I want to hear every bullshit first, no matter how crazy it sounds. Last year, for example, we made our appearance on ‘Die Höhle der Löwen’, the German version of ‘Shark Tank’. It is a TV show that connects startups and investors. We asked ourselves how we could increase our reach. Someone suggested that we needed something that would have roughly the same effect as if we landed in the middle of the Allianz Arena with a giant JayKay parachute at the next FC Bayern soccer game. The result was the TV appearance – which, by the way, was not just a marketing measure in the end, but also an examination of our values and our self-image as a company. Because we had to deal seriously with the question of whether we would be prepared in an emergency to draw outside capital from an investor and give up decision-making power. It is not that easy to remain authentic in the wake of the media.

Just start and stick with it.

LJ: What would you advise others who are planning to start their own business?

Daniel: I think the most important thing is to start and stick with it. One must not overthink too much. I always meet people who tell me about their groundbreaking ideas, but very few who actually implement them. In my opinion, this is often due to outdated beliefs or self-doubts. These only exist in the head. And yes, certain skills are often lacking in order to achieve the goal – but if you start and stick with it, you will learn them in no time. The very fact that you approach it with passion ensures that the entire body and mind are aligned with this matter. That makes you unstoppable. As soon as you can think up something, the first step has already been taken.

JayKay GmbH is a young German company from the Bodensee region that has set itself the goal of expanding sports equipment as we know it today with electronic and digital components. In order to maintain the aesthetics and user experience, the developers rely on the lowest possible use of materials and maximum integration. The core product of the company founded in 2014 is an electronic longboard truck with an invisibly built-in electric drive that can be combined with any deck. Thanks to the one hundred percent free wheeling of the wheels as well as energy recovery when braking, the highly efficient wheel hub motor enables maximum driving pleasure even when the battery is empty. The board is controlled via a specially developed finger ring.

Daniel and I are still in touch. As soon as there is exciting news about the company, I will let you know. Until then, you can always try out a board in one of JayKay’s partner shops in a city near you. Simply contact them via the website. 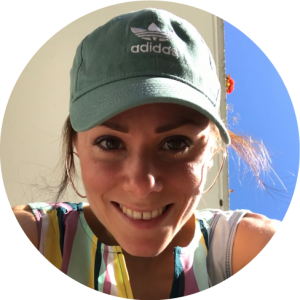 Laura Jane Hoffmann is the founder of Passion Pilot. After working more than ten years as a Marketing Manager in the IT industry she now runs her own creative marketing agency, makes music and works as a dance and fitness instructor. Passion Pilot is her heart project. Together with her network of founders and artists she wants to support people all over the world in finding their passion through creativity, discovering the tools to execute their ideas, and starting their own business.

Join the community and start your own business now. 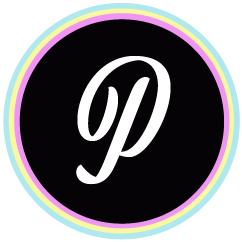 Passion Pilot is a magazine to connect artists, founders, and creative minds all over the world, and to support you in transforming your ideas into reality.